A testimonial game between Republic of Ireland XI team under Jack Charlton and a National Lottery XI featuring stars from the English Premiership managed by Kenny Dalglish.

One of the Republic of Ireland's finest defenders, Kevin Moran.

Over 42,000 turned up to pay tribute to one of the Republic of Ireland's finest defenders. Kevin Moran the 38 year old former Dublin Gaelic football star received a standing ovation when accompanied by his three children, Shauna, Rachel and Dara. He was presented with a special cut glass trophy by the President of the Football Association of Ireland (FAI) Michael Hyland.

Despite efforts from both sides, the score remained nil-all at half time. Less than two minutes into the second half, John Sheridan opened the scoring for the Republic of Ireland with further goals from David Kelly, Ray Houghton, Phil Babb, and the man of the moment Kevin Moran.

The final result was Republic of Ireland 5 National Lottery XI 1.

An RTÉ News report broadcast on 11 May 1994. The reporter is Colm Murray. 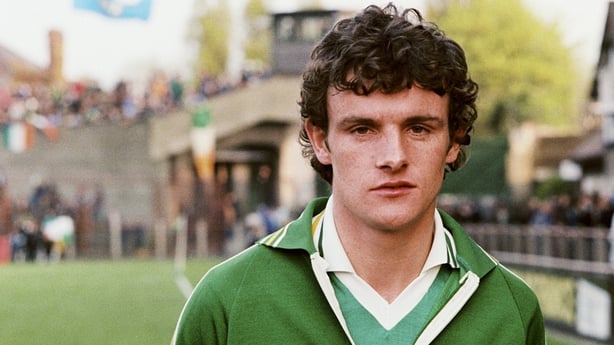