The cows were all being placed first, second or third in their classes, clinching the overall supreme champion award and the international team award. 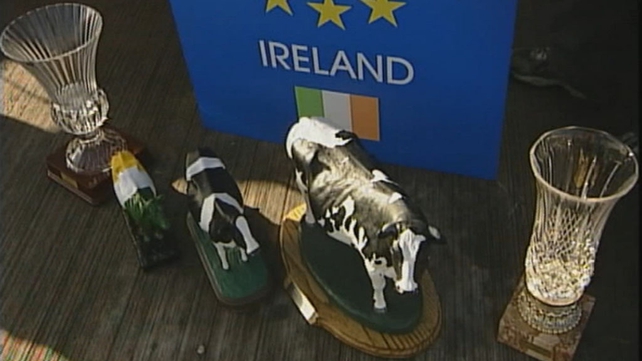 The cows and their handlers arrived back to Cork to a great welcome. Chief Executive of the Irish Holstein Friesian Society Kevin Dillon is delighted with the success and believes the win demonstrates that Irish cows can compete with the best in Europe.

It’s a terrific day for Irish black and white breeders.

The senior class winner, Quantana Melissa Grand, was crowned supreme champion. She is jointly owned, housed and milked by the Kingston Family from Nohoval, County Cork. Peter Kingston says she has won a number of big shows in Europe already but,

This is probably the icing on the cake for her.

An RTÉ News report broadcast on 16 February 2004. The reporter is Sharon Ní Bheoláin.