A bar trick to impress. Pick up a box of matches from the floor using only your mouth while balancing a pint and two glasses of whiskey on your head.

Michael Mulrooney, better known as Mul, performs a balancing act with a pint glass and two half whiskeys on his head.

Ladies and Gentlemen, I'm going to put a pint of Guinness on my head now and I'm going to pick up a matchbox off the ground with my mouth. After that, there'll be two whiskeys involved on the top.

The tension is high at Meaney's pub in Goresbridge, County Kilkenny, as Michael Mulrooney demonstrates his balancing skills in front of a bar full of nervous customers. 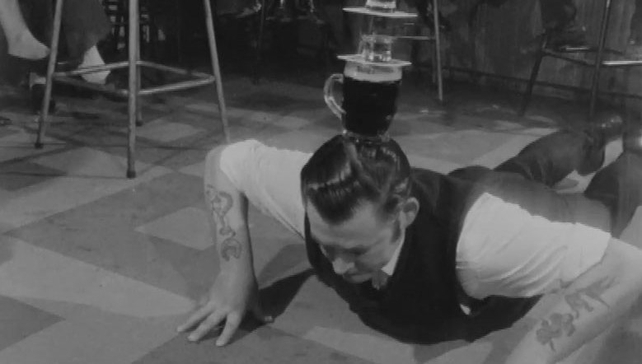 This episode of 'Hall's Pictorial Weekly' was broadcast on 7 April 1973.

The series allowed Frank Hall to follow his own interest in the lives of viewers throughout the country. Regarded as  RTE's flagship comedy show, it featured satirical sketches on current news stories and popular culture, as well as parody songs, comedy sketches, re-edited videos, cartoons and spoof television formats. The show ran for 9 series until 1980. In the RTÉ Guide on the week of its first transmission, Frank Hall wrote

the form and content of Hall's Pictorial Weekly should be impossible to forecast until the last moment. It should be as varied and absorbing as life itself.