Two Philippine priests have lived with the New People's Army in the hills of Negros supporting the guerrilla soldiers who fight for a better society.

Thousands celebrate in Bacolod, the capital of Negros, in the Philippines, as a ceasefire is declared between the Philippine government and the New People’s Army (NPA).  Leading the rebels as they marched through the town, are two Catholic priests, Father Frank Fernandez and Father Vincente Pelobello.  These two men had left their parishes years before to join the rebels in the hills.

Their bishop, Monsieur Antonio Fortich, spoke about why he did not stop the priests who go to join the revolutionari es,

If they believe that they are fighting for a cause, up on the hills, well, you cannot stop them, but then, it should be understood that the Church is not favouring peace through violence, because that to me, would not contribute to the lasting peace that we are talking about.

Fr Pelobello was appointed spokesman for the NPA, and its political wing, the National Democratic Front (NDF), during the ceasefire.  Ordained in 1961, it was in the early 1970s that he became convinced that there was only one way to fight the injustices of Philippine society, and he felt morally obliged to go to his own Mount Sinai in the hills of Negros,

There was a problem initially, on how to reconcile my priesthood with the revolutionary movement, but when the theology of liberation reached the Church in Negros, little by little we see the justness of launching the revolutionary armed struggle in order to effect radical changes in our backward and corrupt social system in the Philippines.

Irish Columban priest Father Niall O’Brien, who is working in parishes in Negros, sees similarities between Ireland’s history, and what Fr Pelobello and Fr Fernandez are working to achieve,

A bit like the bould Fr Murphy of Boolavogue, they just couldn’t take any more, when they saw the people being treated the way they were.  And others of course made the decision because they felt that all the conditions for a just revolution were present... 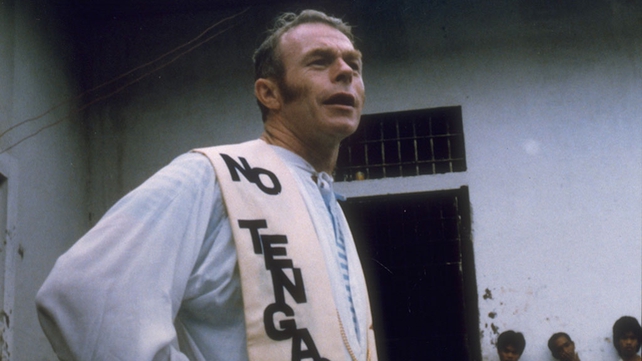 Fr Niall O'Brien during his imprisonment in The Philippines (1983)

This episode of ‘Radharc’ was broadcast on 5 August 1987.  The reporter is Fintan Drury.

'Radharc' can be translated to English as 'view'. Founding director Father Joseph Dunn put together a team of priests, some of whom had received training in television production in London and New York in the late 1950s.

The 'Radharc' team made their first production in 1960 in Donegal, a short film about customs relating to St Brigid's Day. The first programme in the 'Radharc' series for RTE was broadcast on 12 January 1962.
Between 1961 and 1996 the Radharc team would produce over 400 hundred films from Ireland and around the world. The films often dealt with issues relating to peace and justice both at home and abroad.

The popular religious affairs series ended production in 1996 after the death of Father Joseph Dunn.