Efficient, stable, comprehensive is how Taoiseach Charles Haughey described the Irish Banking System. Speaking at the opening of AIB’s new headquarters in Ballsbridge.

The new headquarters was built at a cost of £20 million, with the 15 acre site costing £4.3 million. Built on prime land near the Royal Dublin Society (RDS) in Ballsbridge, the AIB bank centre was designed to accommodate 1300 staff.

When questioned on costs involved Chief Executive Jim Fitzpatrick explains that costs were fully justified and backed up by a cost benefit analysis done by Manchester University.

Designed by Irish architects Robinson, Keefe and Durrane (RKD) the building was one of Ireland's first campus-style business complexes. It was described as the "essence of good taste, discrete, neither imposing nor assertive, a fine example of the defining art of orderly development".

An RTÉ News report broadcast on 19 February 1980. The reporter is Derek Davis. 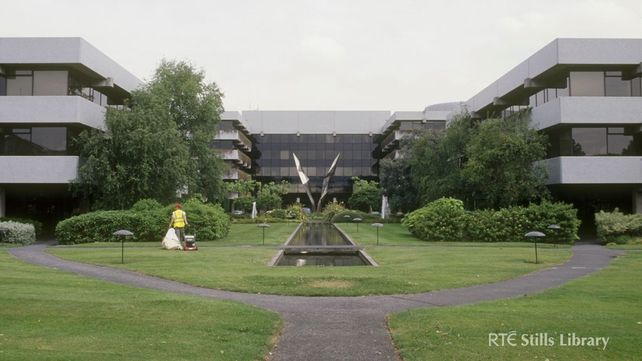