First refugees from Vietnam arrive in Ireland as part of a UNHCR initiative.

A group of 58 Vietnamese boat people were housed in units 11 and 12 of James Connolly Memorial Hospital in Blanchardstown, Dublin.

This unit and one just opposite will be home for the fifty eight Vietnamese refugees spending this their first full day in Ireland.

On the first day of their arrival in Ireland, the report shows the facilities offered at their new home in Ireland.

An RTÉ News report broadcast on 8 August 1979. The reporter is Derek Davis.

In August 1979 the Irish government agreed to take in over two hundred boat people who were fleeing the communist regime in Vietnam. Many of those who left ended up in refugee camps in Hong Kong before they were relocated. The refugees arrived over a number of weeks and were initially housed in temporary units provided by the Irish Red Cross in Blanchardstown and Swords before moving on to rented accommodation. 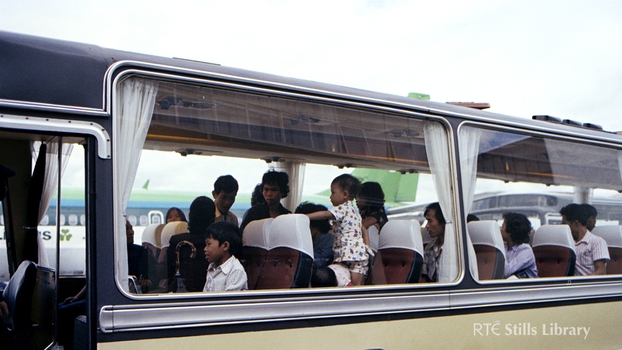