On 6 June 1944 Allied forces landed in Normandy, France and commenced a battle to liberate mainland Europe from Nazi control.

D-Day marked the beginning of one of the key battles of World War II and would see the Allies break through German defences and occupation of Western Europe. While Ireland was neutral during World War II, this neutrality did not apply to the thousands of Irish who signed up on the side of the Allies.

D-Day survivors Tommy Meehan and Paddy Devlin speak to Phil Crotty about their experiences in Normandy.

Dubliner Tommy Meehan was an airborne soldier who landed in Normandy on D-Day. Due to lack of work, he joined the British army. Meehan talks about the plans for allied troops to land at Normandy. He describes his fear when D-Day actually arrived and losing friends and comrades. Meehan spent three months in Normandy. On reflection, he feels that war is futile.

Paddy Devlin reflects on his relatively quiet and risk-free arrival on a glider in France.

An RTÉ News report broadcast on 6 June 1984. The presenter is Michael Good and the reporter is Phil Crotty.

The accompanying photograph above shows US soldiers of the Allied Expeditionary Corps stand guard on a beach 06 June 1944 after Allied forces stormed the Normandy beaches during D-Day. 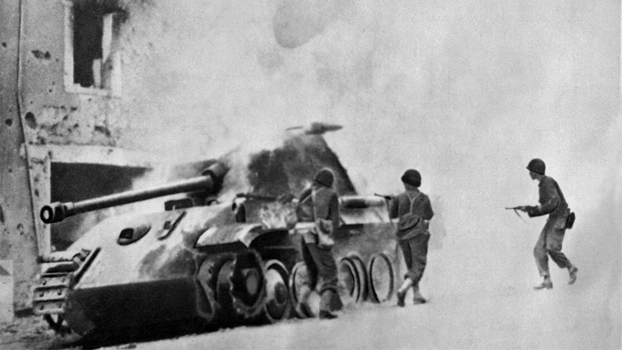