'Tangents' reports on a bicycle collector's obsession with bicycles going back to Victorian times.

Larry Masterson meets bicycle fanatic Pete Matthews. Since becoming interested in racing bicycles, Pete started collect different types of bicycles. He explains that they are not always easy to source and usually finds out about bicycles through people he meets at carnivals or fairs, or alternatively in antique shops. The bicycles are generally in poor condition when Pete acquires them so he spends a lot of time fixing them up.

The oldest bike in Pete's collection is an 1868 'Bone Shaker' which has wooden wheels and was made popular at the time by the dandies in Paris.

Pete also provides some history on the 'Penny Farthing' which appeared around 1871. Despite its speed and grace, it was generally considered to be quite dangerous and was responsible for many fatalities. There were even instructional books on how to cycle a penny farthing and what to wear while doing so.

Pete has also invented the 'bed-bike' which gets a lot of attention when Larry Masterson takes to the road in it. He is joined by Pete and others on a number of different bicycles they are followed by a large number of children.

This episode of 'Tangents' was broadcast on 11 March 1974. The reporter is Larry Masterson.

The report includes a recording of 'The Pushbike Song' which was written by brothers Idris and Evan Jones and was released in 1970 by Australian band 'The Mixtures'.

A miscellany of events, entertainment, opinions and personalities, 'Tangents' was first broadcast on Monday 25 September, 1972 and ran until 1974.

'Tangents' was presented by Cathal O'Shannon and Doireann Ní Bhriain on Monday, Wednesday, Thursday and Friday and by John O'Donoghue each Tuesday. 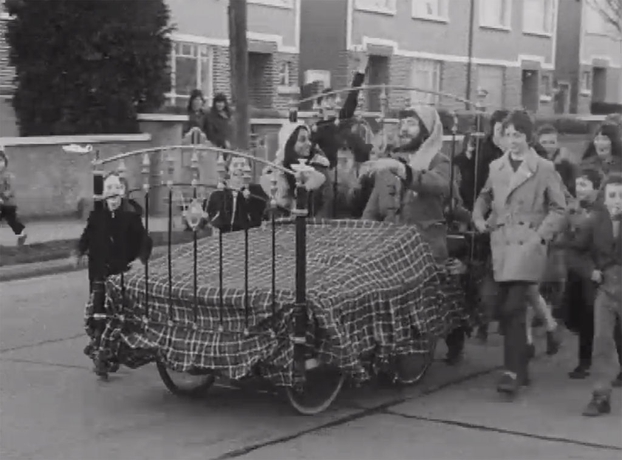