The Pentecostal Movement has been growing within the Catholic Church, beginning in America and spreading to Ireland.

On Pentecost Sunday 1973, the movement was strong enough to hold an open-air rally on the Hill of Slane, County Meath. Radharc were at this gathering and visited meetings at various locations to see the dedication of participants of the Pentecostal movement, young and old, religious and lay.

Catholic Pentecostalism in Ireland, also known as Charismatic Renewal, promotes spiritual renewal within the Church and welcomes both Protestant and Catholic participants. While it was initially viewed with a degree of scepticism by some in the church, many individual priests and nuns whole-heartedly embrace it.

Father Edward O’Connor, one of the founders of the movement addressed participants at a recent day of prayer and renewal. He provides a background to the movement involving speaking in tongues, prayer meetings and the importance of spiritual renewal. 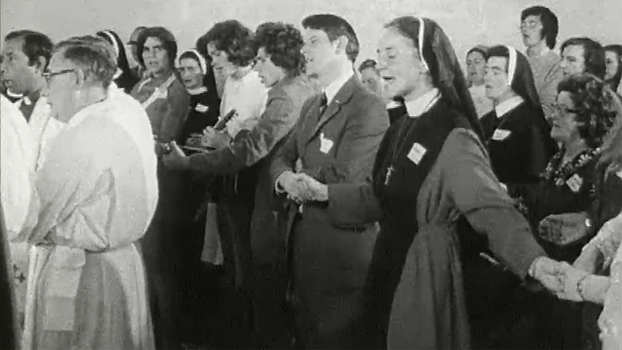